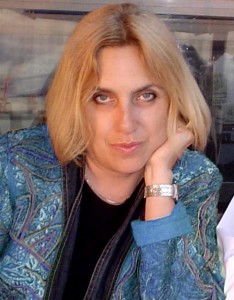 Gina’s puppetry career began in earnest after she received her MFA degree in Puppet
Directing from NATFA (National Academy for Theater and Film Arts) in Sofia, Bulgaria.
Only a year later she received her first accolade at The International Festival in Varna,
Bulgaria, where she was awarded The Golden Dolphin for Directing – a prestigious
acknowledgment for puppeteers.

In 2008 Gina and her colleague from CSUSB, associate professor J. Smith, were recipients of a travel grant from TCG (Theatre Communications Group) to present a collaborative, multimedia puppet performance with the students from CSUSB at the International Puppet Festival in Sofia, Bulgaria.

Gina publishes articles about puppetry in American and Bulgarian professional magazines. She has made a presentation at the “Problems of East European Theater Academies Conference”, Miami University in Ohio; at the International Meeting of the Professional Puppet Schools at Charleville-Mezierre, France; special presentation titled “The Bulgarian School of Puppetry” at The Theater Conference, Eugene O’Neil Theater Complex in Storrs, Connecticut.

Most recently, she has been busy promoting her principal theory entitled “The Minimalist Puppetry Approach”. She gave a lecture and held workshops at the International Puppetry Conference at the University of Connecticut in 2011 and has been implementing the theory in her own shows at puppetry festivals in Whittier, Los Angeles, and Seattle.